In 1986 a German student and patient at that time, demonstrated at a doctor-patient seminar in the Cardiovascular Clinic in Bad Berleburg (Germany) that she was able to monitor her INR results by herself. 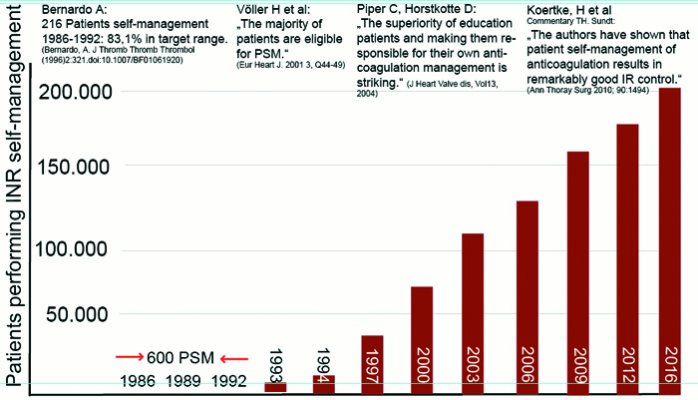 The idea was so attractive that Carola Halhuber, MD, decided to adopt it and began to offer patient training courses for INR self-management at her clinic. Shortly thereafter, initial assessments were carried out to determine the effectiveness of INR self-monitoring and whether these results lay within the required therapeutic range. This marked the beginning of what was to become a major success story although more than the more years were to pass before doctors were to focus attention on anticoagulation self-management/testing.

More than 60 years experience with VKA shows that they are not a "bad medication". In most of the DOAC studies, the efficacy of VKA was comparable to DOAC, although the TTR was very low in the VKA comparison group. With a better INR control, the VKA would have done even better. Unfortunately, we will not get studies comparing well-trained patients self-determining INR values to patients taking DOAC. For me, there is still no need to replace a well-controlled and uncomplicated VKA medication by DOAC. Another point of course is compliance and adherence. Often patients with bad INR control are switched to DOAC. However, if bad INR control was not due to medical problems but caused by bad compliance or adherence, the switch to DOAC was the wrong step. A patient who does not take VKA will also not take DOAC. Since DOAC are not monitored, the doctor will not notice if the medication is taken. Monitoring, such as absolutely necessary for VKA, increases adherence and, thus, improves outcome. In my opinion, only very compliant patients should be treated with DOAC, since non-consequent intake of the agents can be harmful due to the short half-life. Even not taking one single dose can lead to loss of the anticoagulant effect. Incompliant or in adherent patients are absolutely wrong candidates for the DOAC!"