The phone rang. I took the call. My aunt at the other end came straight to the point. “Your uncle’s had a stroke”, she said. “He’s in hospital.” Up until then stroke was something I had occasionally heard mentioned, but I had never been personally affected. My question as to how he was must have sounded a bit awkward. Paralysed down one side and having serious problems with speech. We’d have to wait and see. 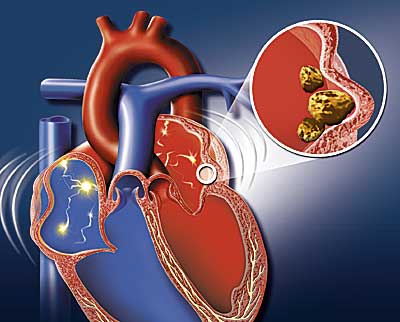 Two weeks later my wife and I called to say we’d be paying a visit. As we drove to the hospital with my aunt, she said she was very concerned about the future. The chances of a full recovery were slim. She spoke about long-term care and conversions that might need to be made to the house.

For me, however, the more pressing issue was how to approach a stroke victim – especially one who is a member of the family. How should I act on seeing him? Cheerful as we always were when we met, or ... The sun was shining, so we sat in the hospital garden and waited for him to arrive. My aunt pushed the wheelchair. There he sat – shadow of his former self. We could tell he was pleased to see us. Which was a signal for me to greet him in the usual way. Eye contact made up for the lack of verbal communication.

Six months later we visited my uncle again. He was at home in an armchair which had been bought specially for him. He was glad to see me. In very slow, deliberate sentences he answered my questions. We had a couple of beers to celebrate the fact that he could now drink unaided.

My aunt was beginning to show the strain. The daily worries and always having to be there had taken their toll.

I talked to her about “how it happened”. “You know”, she said, “I first noticed something about a year ago. As we were driving along there were a few seconds when I couldn’t get anything out of him. At the time I didn’t think anything of it. Also, he had had an irregular heartbeat for some time. As the doctors in the stroke unit at the hospital told me, no anticoagulant medication was prescribed. This is one possible explanation for him having the stroke.”

What is a stroke?

A stroke is when the brain spontaneously, i.e. suddenly, loses certain of its functions as a result of defective circulation, possibly causing paralysis, an unsteady gait and disturbed speech or vision.

If the defective circulation, coupled with the loss of function mentioned, lasts longer than a day, then brain tissue will already have suffered irreparable damage. A stroke, with all its consequences, has happened.

How many people a year suffer a stroke, in Germany for instance?

There are no precise figures. One estimate puts the figure at about 250,000 per year, while the German Office For Statistics and various academic authors talk of up to 500,000 strokes per year.

Can it affect anyone?

No, but there are risk groups, with women being more frequently affected than men. The risk groups include, for instance, people who are mostly over 50 and who have untreated blood pressure, diabetes, or atrial fibrillation. An exacerbating factor is that people in these risk groups often take too little exercise, are smokers, and are over-weight.

If, in addition, they have high cholesterol (i.e. their total cholesterol is permanently above 240 mg/dl), the risk of stroke is raised accordingly. By itself, the cholesterol value does not say a lot. The two types of cholesterol – “good” cholesterol, HDL and “bad” cholesterol, LDL – should be measured separately. If HDL is continuously below 50 mg/dl and LDL continuously above 130 mg/dl, the two values should be checked after a while to allow drug therapy, if necessary, to commence.

Does lifestyle play a role in stroke?

Available data would indicate that the modern lifestyle of people in the western industrialized nations has a major impact.

There are various types of strokes
Cerebral infarction is involved in 78 % of all stroke types. A distinction is made between blockage of an artery by a blood clot (thrombo-embolism) and blockage of a cerebral artery through narrowing as a result of atherosclerosis (hardening of the arteries).

The cause of these infarctions are thrombi which become lodged in he artery after having been transported there by the blood stream. The supply of blood and oxygen is then no longer adequate in certain regions of the brain. Ischaemia develops and can lead to cerebral infarction.

Hardening of the arteries (atherosclerosis) is a less frequent cause of blockage in the brain, 14% of strokes are due to excessive bleeding (haemorrhaging) within or around the brain, which is mostly caused by high blood pressure, when readings are persistently above 140/90 mm Hg. The higher the blood pressure readings are, the greater is the risk. Blood escapes under high pressure from the burst vessels. The accumulation of blood presses on the neighbouring nerve cells, which can suffer damage.

Approximately 8% of strokes are due to dysfunction of the clotting system, haemorrhaging between the brain and the soft meninges, or vascular lesions, e.g. as a result of a whiplash injury or sudden violent movement of the head, though the latter are rather rare.

Atrial fibrillation poses the greatest risk of cardiogenic embolic cerebral infarction, i.e. infarction which is triggered by the heart.

Although atrial fibrillation is not life-threatening, it must nevertheless be treated, firstly because of the long-term damage it can do to the heart, and secondly because of the potential for triggering a blockage in the brain, for instance, the kidneys or the leg arteries.

Due to the fact that the atria can no longer contract properly, if at all, blood becomes motionless in various parts of the left atrium. This is termed haemostasis, and may result in thrombus (clot) formation. If a thrombus is washed away and becomes lodged in the blood vessels around the brain, the supply of blood is disturbed, leading to cerebral infarction.

Where atrial fibrillation is persistent, life-long therapy with anticoagulants is required.

Anticoagulation is instituted with Marcumar®, Sintrom®, Warfarin in order to prolong the blood clotting time. The therapeutic range is between INR 2.0 and 3.0.

Narrowing of the main arteries to the brain (atherosclerosis)

Often, narrowing of the blood vessels that supply the brain is only noticed when circulation disorders become manifest. The trigger is a so-called transitory ischaemic attack (TIA), a short-term interruption of blood supply to the brain, the symptoms of which are sudden weakness in the arms and legs, and visual or sensory disturbances. The treating physician will order an ultrasound scan (sonography) of the vessels supplying the brain and discover that narrowing (sclerotic lesions on the blood vessel walls) has occurred.

If the vessels are more than 70% - 80% sclerotized, there is an increased risk of stroke.

The consequences of atherosclerosis

From the age of about 50 onwards the smooth inner surfaces of the blood vessels become roughened and fissured through the development of calcareous deposits. Over the years these deposits grow and can ultimately lead to almost complete blockage of blood vessels. This is termed stenosis.

Blood constituents can then become lodged unhindered at the points of narrowing. Feared thrombi develop. The powerful bloodstream can then dislodge the thrombi and carry them to the smaller branches of the cerebral arteries. The thrombi block the small blood vessels. Blood flow is effectively interrupted at this point and the supply of vital oxygen contained in the blood can no longer be sustained. The loss of blood flow triggers an arterial embolic infarction.

High blood pressure poses a continuous strain on the blood vessels and encourages atherosclerosis – even if the person is symptom-free. The stroke risk increases 2.5 to 6.3-fold.

Medication to treat high blood pressure must be taken regularly. Unfortunately, some patients show poor compliance owing to an ill-placed fear of side-effects.

Things that will help

There are a few important things that will help prevent stroke.

Stroke – predestined or avoidable? The choice is yours.