Latest opinion confirms overwhelming evidence of the benefits of risk-adjusted oral anticoagulation on stroke reduction in patients with atrial fibrillation. 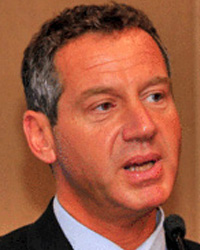 International experts have warned that the burden of cardiovascular disease (CVD) will continue to increase if diagnostics is not accepted as a significant part of the management of the condition. Speaking at a media conference, being held alongside the first Roche Asia Pacific Cardiology Forum, Dr Marcel Levi, Professor of Medicine, University of Amsterdam said that the management of Atrial Fibrillation (AF) is much improved if frequent monitoring is central to the treatment.

Atrial Fibrillation is one of the most common heart rhythm disorders, affecting 8% of the population over 80 years of age.i It is considered one of the major risk factors for stroke, as well as a significant contributor to hospitalization of elderly patients, with a 66 percent increase in hospitalization over the last 20 years.ii Worldwide the impact of AF is enormous, with an estimated 5.6 million people suffer from AF in the US,iii 4.5 million in Europeiv up to 8 million in China alone.v

The most effective treatment for AF is anticoagulation therapy which has been shown to reduce stroke risks by at least two thirds (68%).vii Alarmingly, despite the compelling evidence for its effectiveness, particularly in reducing stroke risk, it is still underused in high risk patients. Worldwide an average of only 30 percent of patients with AF are treated with oral anticoagulation,viii whereas it is estimated that 60-70 percent of AF patients should be using this treatment.ii

"One of the main reasons that physicians do not prescribe anticoagulation therapy is that they fear excessive bleeds. However, if frequent monitoring of INR levels is considered central to the overall patient management, the risk of adverse events can be controlled," said Dr M. Levi.

Dr Levi’s remarks come on the back of a new consensus paper developed by a multidisciplinary expert group which recommends improvements in the management of anticoagulant treatment in patients with AF. A key conclusion of the consensus statement is that when monitored frequently the benefit of stroke reduction outweighs the risk of bleeding associated with treatment with anticoagulation therapy in high risk patients.ix

There are a number of different models when it comes to monitoring anticoagulation and the choice of care is a major aspect contributing to patient outcomes. This ranges from Usual Care (UC), where patients are cared for by a physician and have their INR levels tested by IV blood tests; Alternate Site Testing (AST – mainly used in Warfarin Clinics) where patients INR levels are tested in the clinic via portable monitoring devices such as CoaguChek, requiring only a finger prick; and Patient Self Testing (PST) where a patient monitors their own levels at home using the same portable monitoring device.

"The more involved a patient is in their own management, the greater reduction there is in complications from clots, excessive bleeding and even death," said Dr M. Levi. "Frequent monitoring – that is, at least once a month if not once a week – can contribute to better patient outcomes. Warfarin Clinics with AST setup provide patients with a more convenient way of monitoring, which encourages and facilitates frequent monitoring. Patient self testing provides even better outcomes."

Also presenting at the media conference is Mr Christian Schaefer, President of the International Self Monitoring Association of oral Anticoagulated Patients and a strong proponent of PST. "I test myself at home on a weekly basis, which accounts for more than 1,200 times over the past 23 years and I urge other patients around the world to do the same. Managing my condition in partnership with my doctor means that I am able to have control over my life and take into account changes in my daily activities so that we can adjust my warfarin dose accordingly," said Mr Schaefer. "It’s my condition and my health, so I want to make sure I play an active part."