You notice that your heart does not always have the same rhythmic beat. It jumps a little. Occasionally one beat is stronger than usual. Your heart may temporarily beat faster.

Although you hardly notice any changes in your physical performance, you are concerned. So what do you do?

To do nothing is the wrong response, because these symptoms are warning signals. The correct response is to visit your family doctor. You owe it to your heart. 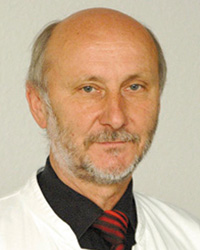 If your doctor discovers you have atrial fibrillation

After your doctor has asked questions, measured your blood pressure and listened to your heart through a stethoscope, the next step will be for you to have an electrocardiogram (ECG). Based on the results of the physical examination and ECG, the doctor will be able to identify what type of arrhythmia you have. If the cause still cannot be diagnosed, a 24-hour ECG and/or a stress ECG may provide more information on why your heartbeat is irregular.

The heart muscle contracts (systole – contraction phase) and relaxes (diastole – relaxation phase) in a repetitive rhythm. During systole the pulmonal and aortic valves are open and the “used” blood is pumped into the lungs and the “fresh” blood into the systemic circulation. During the diastolic phase the right ventricle fills with “used” blood and the left ventricle with “fresh” blood.

This occurs in a uniform way 60 to 80 times a minute. The sino-atrial node, the heart’s natural pacemaker, is responsible for the regular activity of the heart. The sino-atrial node is situated in the upper right part of the heart, where the superior vena cava flows into the right atrium. The impulses that control the activity of the heart are transmitted to the atria and ventricles via a special conduction system. In order to ensure that the atria and ventricles do not contract simultaneously, the atrio-ventricular node (AV node) delays the impulses such that the two atria are delayed first, and then the two ventricles. When this occurs in a coordinated fashion, the heart beats in so-called sinus rhythm.

What happens in atrial fibrillation?

In atrial fibrillation, on the other hand, stimulation of the heart is uncoordinated. The atria in particular are no longer properly activated. Instead they receive many mini-signals at over 300 impulses per minute in an uncontrolled fashion. As a result, the important lower chambers of the heart receive signals only erratically via the AV node, which functions as an electrical filter only able to conduct 60 to 100 impulses per minute. The AV node cannot prevent the irregular conduction of impulses to the lower chambers.

Who is most likely to have atrial fibrillation?

Atrial fibrillation is most likely to occur in the elderly. It is estimated that about two to four percent of persons aged over 60 in Germany have this cardiac arrythmia,

Where there is acute atrial fibrillation, cardiac output is reduced by 20 to 25%. Patients notice this in particular during stressful activity.

The importance of early detection of atrial fibrillation

Atrial fibrillation can increase the risk of blood vessels becoming blocked in the brain (stroke), kidneys and leg arteries. Due to the fact that the atria can no longer contract properly, if at all, blood becomes motionless in various parts of the left atrium. This is termed haemostasis, and may result in thrombus (clot) formation. If thrombi become dislodged and washed to the brain, for example, they can cause stroke.

When other risk factors exist (such as high blood pressure, diabetes, an enlarged atrium or enlarged left ventricle as well as increased spontaneous ultrasound echoes), anticoagulation therapy is a must.

Long-term anticoagulation can reduce the risk of blood vessels becoming blocked in the brain by 68%, and of embolism in the systemic circulation by 65%. The chance of lethal blockage of blood vessels occurring can be reduced by more than 33%.

The action of quinine

As early as 1749, French doctor Jean-Baptiste Sénace (1693 - 1770) described the beneficial effect of quinine on heart palpitations, so identifying a substance which to this very day has been useful in the treatment of atrial fibrillation.

Quinine is a white crystalline substance obtained from cinchona bark which, even in the 17th Century, was being used as an antimalarial. Sailors heading for south-east Asia were given tonic water containing quinine to ward off malaria. To improve its rather bitter taste they added gin, creating the famous, or infamous, G&T. Drinking this medicated tonic water also had the beneficial effect that the seafarers suffered far less from cardiac arrhythmias.

In 1914, Karl-Friedrich Wenckebach noticed in studies that he was conducting that atrial fibrillation can be eliminated by administering 1 g of quinine. In 1918, Walter Pfei succeeded in slightly modifying the chemical structure of quinine to produce quinidine which, even today, is a valid treatment for cardiac arrhythmia.

How is atrial fibrillation treated?

The treating cardiologist will detect the irregular rhythm of atrial fibrillation based on normal ECG, 24-hour long-term ECG and stress ECG traces.

In newly diagnosed paroxysmal atrial fibrillation or persistent atrial fibrillation in particular, treatment should be started early in order to maintain a stable, regular sinus rhythm. Drugs known as antiarrhythmics can often be used to eliminate the arrhythmia quickly.

First deal with any underlying conditions

Before antiarrhythmic agents can be prescribed, the doctor will detect and/or exclude the primary cause of the arrhythmia. If the primary cause is found to be, for example, a heart valve defect or other underlying condition (see list on page 4), the doctor will deal with it first in order to give the heart the opportunity to return to a regular sinus rhythm of its own accord.

Rhythmization of the heart required

Once any underlying conditions have been ruled out and there is still persistent or paroxysmal atrial fibrillation, an attempt at quickly regaining normal heart rhythm is recommended. An antiarrhythmic agent is the drug of first choice.

It must be remembered, however, that all antiarrythmics with the exception of beta blockers and salts of potassium and magnesium can in rare cases induce paradoxical life-threatening cardiac arrythmias. For this reason it is important to maintain close contact with the family doctor when antiarrythmics are being used, to enable new possible life-threatening arrhythmias to be detected immediately.

If an attempt to stabilize the sinus rhythm with medication has proven unsuccessful, a decision will be made to apply what is called electric cardioversion.

Stenosis (narrowing) of the blood vessels that supply the brain should be ruled out.

Electric cardioversion is performed using a form of electric shock therapy. The aim is to change an irregular pulse back into regular sinus rhythm.

When electric cardioversion is performed, it is important that anticoagulation be started at least three weeks beforehand. A therapeutic INR range of 2.0 to 3.0 should be adhered to.

Following successful cardioversion – whether achieved with drugs or by electrical means – oral anticoagulation must be continued for a further three to six weeks. The therapeutic range is again INR 2.0 to 3.0.

Following that period, assuming a stable sinus rhythm has been achieved, anticoagulation can be phased out.

If sinus rhythm is not restored

If an attempt at restoring normal sinus rhythm has failed, the condition is known as persistent atrial fibrillation, and long-term therapy with anticoagulants is necessary.

Anticoagulation is instituted with Marcumar®, or Sintrom®, in order to prolong the blood clotting time. The therapeutic range is between INR 2.0 and 3.0, which means that the blood takes two to three times longer to clot than the original clotting time.

The importance of staying within the therapeutic range

Falling above or below these recommended INR values must be avoided, as there is a risk of thrombus formation at the one extreme and increased risk of bleeding on the other. For this reason regular checking of clotting times is crucial. These checks are usually performed by the treating physician.

However, national and international studies have shown that fewer than 50% of patients treated with anticoagulants succeed in remaining within the prescribed therapeutic range.

With persistent atrial fibrillation there is a relatively high risk of thrombo-embolic or haemorrhagic complications, which have a lasting damaging effect on the patient.

This was the reason for commencing further studies (ESCAT I and II), aimed at demonstrating in large patient populations that INR self-management significantly improves anticoagulant therapy. More than 80% of the INR results obtained were within the prescribed therapeutic range. This method of dose adjustment improved the quality of therapy and significantly reduced the occurrence of thrombo-embolic complications. In particular the occurrence of strokes fell by more than 50%.

Under INR self-management the patient learns to interpret INR values and decide what anticoagulant dose to take. In close co-operation with the doctor, or course.

It has also been found that, because the patient takes on some of the responsibility for his or her therapy, not only does the quality of therapy improve but also the quality of life.

What does INR self-management offer?

We tend to offer INR self-management to patients with persistent atrial fibrillation, because of the life-long need to take oral anticoagulants, in order to obtain benefits such as:

A balanced diet and plenty of exercise are recommended

A potassium-rich diet that includes fruit, especially bananas, and vegetables can occasionally alleviate atrial fibrillation. Where a patient has impaired kidney function, he/she should ask the doctor whether the increased intake of potassium is appropriate.

The uncontrolled use of laxatives can cause the body to lose potassium, thereby triggering or exacerbating atrial fibrillation. Excessive alcohol consumption is to be avoided.

A balanced diet and regular exercise are recommended for patients with atrial fibrillation, not to mention an absolute ban on smoking.