INR Self-Management – A model for the future

The 10th National Conference on Anticoagulation Therapy was held May 7th – 9th 2009 in San Diego, USA. 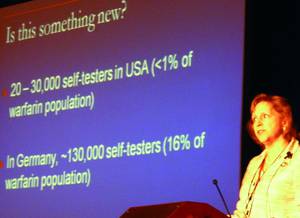 During the conference, it was discussed with more than 700 participants, whether INR self management is a beneficial approach. Lynn Oertel, Boston, raised the question, whether INR self management is really a new approach and referred to Germany, where 16% (now 20 % = 160,000) of patients on anticoagulation therapy perform INR self management. In contrast, only 1% of US patients perform INR tests at home, no one even to talks about self- management. On the question, why patients should test themselves, she referred to the meta-analysis by Heneghan et al. (2006), which showed that patient self testing leads to less thrombo-embolic events as well as less bleeding events.Further topics discussed where eligibility of patients for self testing, associated costs and the reduction of stroke rates. Lynn Oertel cited the recent publication of Gladstone DJ (Stroke, 2009) that “it is astonishing that cheap anticoagulants proven for decades are underused in stroke prevention in atrial fibrillation (SPAF)”.She concluded that it is about time for patients in the US to have the opportunity to test their INR values themselves.Prof. Dr. Edward Libby, Albuquerque, raised the question whether patients have a sufficient literacy to handle the devices right, given the fact that they already have difficulties in therapy compliance or interpretation of blood glucose levels if they suffer from diabetes. In contrast, in Europe and Germany specifically, INR self management is an integral part of patient care.He specifically pointed out the valuable and beneficial work of national and international patient organizations like ISMAAP.Prof. Dr. Ann K. Wittkowsky, Seattle, expressed the opinion that oral anticoagulants such as warfarin, will still be used in the future. Therefore INR self-management is certainly a model for the future.